The NES Classic is here, and it’s about as popular as expected. It sold out virtually everywhere within hours, and remains difficult to find even almost three weeks after release. According to eBay, an NES Classic was being sold every 18 seconds, with listings commonly reaching triple, quadruple, or even quintuple digits. At 1.5lbs, that puts the unit at about $400 per ounce, putting it in competition with some precious metals. Considering the NES Classic launched with an MSRP of $60, if this were a stock, it would be one of the most successful IPOs in history.

So now, everyone’s question is: what’s next?

At least a few cards of that hand have already been tipped. Nintendo announced their next console, the Switch, about a month ago, showing off some impressive concepts. But one thing they’ve been rather mum about has been one of their most imporant assets: the Virtual Console.

It’s far from secret that the Wii U fell short of expectations, and among those disappoitments was the Virtual Console. Let’s analyze for a moment.

As of this writing, some 398 games are available on the original Wii’s Virtual Console in North America. Another 219 are accessible on the 3DS, with just 257 on the Wii U. It doesn’t look great; this is one of Nintendo’s most reliable cash cows, and they have all but refused to capitalize on it. For most of the Wii U VC’s history, it has been releasing games at a rate about half that of the original Wii. Another way to look at it: it has averaged 1.2 games released per week (from 7 original consoles), against the Wii’s rate of close to 2 per week for the same time period. It feels horribly underutilized, considering a great deal of gamers are perfectly willing to shell out $5 for a 30-year-old game (which, to be fair, has some added nifties like save states).

Nintendo kind-of sort-of took advantage of this nostalgia tap with the NES Classic, a compact MiniMe of an NES that has 30 games stored onboard and can be hooked up to a modern TV and plays its games very well. Reviews are generally good, but for one common thread: you are stuck with those 30 games. You cannot download or install more. 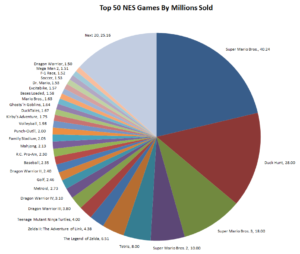 That’s not to say it’s an unreasonable limit. Outside of the top 10% or so of games for a given console, popularity falls off quickly, and the return on investment for bringing more games to playability is nil. This problem also hits the most popular console emulators, and is the reason why niche games with odd programming quirks are never fully compatible: perfect accuracy is expensive, in terms of processing power. Often, the rarer or lesser-known games tend to have more idiosyncracies, and the combination of both these qualities greatly impacts the chances that someone will take the necessary time to ensure it runs properly.

This is compounded by Nintendo’s obsessive-compulsive tendencies when it comes to emulation. Releases tend to be slow coming and limited by hardware, such as in the case of SNES games, which are only available on the New 3DS and not the older model, due to the lesser power of the CPU. While there is no doubt that the old 3DS could run SNES games acceptably well, they wouldn’t run up to Nintendo’s standard. While their standard tends to be rather high, that’s not necessarily a bad thing when one considers the aforementioned issue of idiosyncracies.

But that’s also somewhat beside the point for Nintendo: they have massive cash reserves and some great programming genius in their pocket. One easily-executed solution for them would be to simply create a new division of the company that does nothing but focus on Virtual Console releases. It must also be said that licensing is another issue (and rather a bitch of one, often), but the simple reality of the situation is this: if companies want to make money, they will license out these games. A game not being sold doesn’t make money, and more often than not, drives people to emulation, which also commonly entails illegally downloading ROMs of games. An easily-available legal solution is a powerful deterrent in this realm.

This leads directly into the next point: The Virtual Console could easily be a subscription service. This sort of concept has been done before, with varying degrees of success, but with the power of Nintendo nostalgia behind it, a VC service would be a juggernaut. It is something that has been talked about in publications and podcasts for years now, and it has definite merit. Sell a box like the NES Classic, but with space for an SD card or laptop hard drive, and make it powerful enough to run everything up to the N64. Put a monthly price on it, or allow games to be bought outright, and people would want this. Make it simple to buy the unit and the games, and make it easy to use. RetroPie already has a great UI design and wide compatibility, and would be a fantastic model to build on.

Nintendo should, at very least, be considering this. Form a new division specifically to support the Virtual Console, and release a box to stream or download games for a subscription. $5, or even $10 a month would be a steal for the hundreds of games that could be made available this way–even if Nintendo only released its own first party titles, it would result in a catalog numbering in the hundreds. A relatively cheap, compact, low-power machine with a dual- or quad-core 2GHz processor would be capable of emulating most anything up to and including N64 with sufficient accuracy. It could include Miiverse support just like the Wii U for sharing screenshots and posts. It could really be something.

But who knows? It’s very possible Nintendo is planning something like this right now for the Switch. It would work well for that, too. I just hope they don’t continue to let this atrophy; we’ve already lost too much to corporate apathy in the last few years to see this be neglected as well.